Stage 1 of the Tour of Little France

Harbour Grace to Cupids: this was a trial ride, to see how our bikes worked, and to see how fit we are (not very). 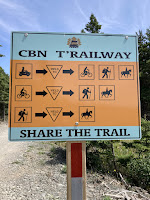 We got in the track at River Head in Harbour Grace and immediately regretted it.

The old track from Harbour Grace to Tilton is the worst we’ve ridden, and seems to have gotten worse in recent years.

Lots of work has been done on the track recently, especially around Bay Robert’s and Clarke’s Beach but that area was also swarming with ATVs. Most of them were lovely and considerate and moving slowly, but a few places had lots of kids on three wheelers, riding fast and kicking up a lot of dust.  But no problems and everyone very friendly. 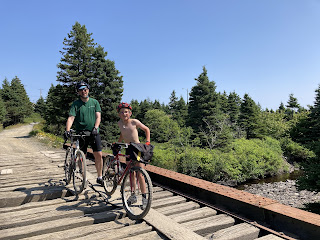 I didn’t stop to get pictures at any of the roughest sections, but there are some great bridges. The track sections which run through the ponds along the coast are just fab too.

This part of the trailway winds through lots of communities. In the BayRoberts area, a lot of the track sections have become roads, but quiet ones.  ATVs are routed away from some roads, but on bikes we were able to stick to a straight line, mostly on the original route. Also lots of shops for buying cold drinks, and even lunch stops. We had hoped to have lunch at the baccalieu trail brewery but it wasn’t open yet, so instead we got hot  dogs at the gas station and ate them while watching the seabirds in Spaniards Bay. 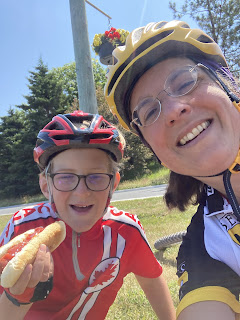 Overall we rode just under 40km, which was enough for our first long ride in several months. We stopped a lot, to reapply sunscreen and empty our bottles, we even paddled in a pond. We had a hare lollop across the path, and a red squirrel dashed across too. Amazingly, the bikes held up, and we’re looking forward to the next stage.
Tour de Little France details: https://www.justgiving.com/fundraising/dormanfamily
Strava route here:  https://www.strava.com/activities/7485822962
Gaia GPS: https://www.gaiagps.com/public/MAHLpffJfOONHWT7mv4oMRfd 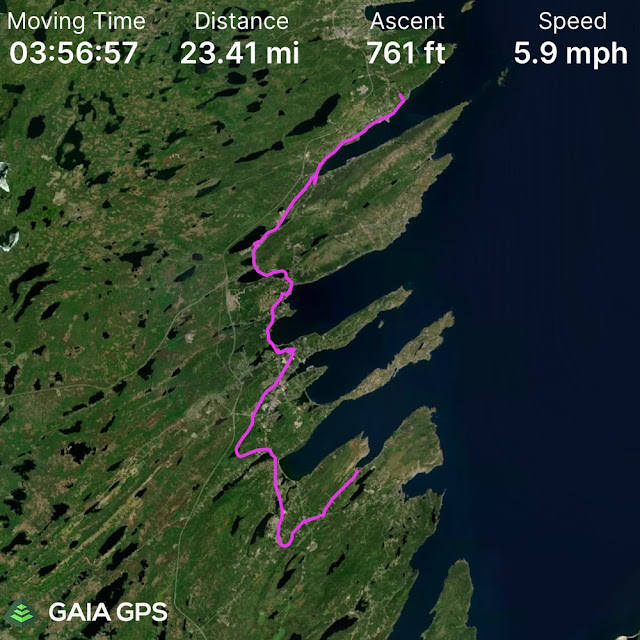