Not an April Fool's Day Joke

We've been running a bit late this week, owing to the time change. Which meant that my 7yo has been riding her bike to school, and arriving around 8.40.

The school is on a cul de sac, with two gates, and three pedestrian crossings (in green) forming three sides of a rectangle between them.  You can see the range of possible movements here in red: 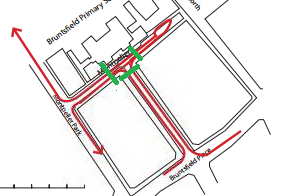 Today I stayed around to watch what the cars actually do. Here's a selection of what I saw, starting with the left-most gate where older children are often dropped.


A lot of drivers that drop their kids between the two gates then use the space between the three crossings to attempt a U turn.  Unfortunately, this often means impinging on the crossings themselves, turning the space right in front of the school into an ersatz  turning circle - as you can see below.

Basically, these cars are avoiding the cul de sac, but instead driving over one crossing twice, and 'clipping' another one as they turned.

This illustrates very clearly how easily accidents can happen in a contricted space, with too many people in a hurry trying to go in different directions.

The vast majority of parents either walk their kids up, or park sensibly and considerately before walking the final few metres to the school.  The cars pictured here are a tiny minority. But the space is so constrained - and there are so many children and parents using it -  that even one poorly manoeuvred car can be a danger to all.

Please for give my ignorance, since I don't know the area personally, but a quick look on google maps shows that there is absolutely no need for cars to turn round at all. If parents were to drop their children in Montpelier Park there are several "blocks" they can then drive around in order to head back in which ever direction they came.

Yes, Phil. you are completely right. but some kids apparently have to be dropped right at the gate.

What are the red stripes of paint across the road? Are they some kind of 'buckshee' pedestrian crossing that don't meet any standards whatsoever?

Why do CEC put down features on roads that are non-standard and confusing?

I've often wondered that myself....luckily most drivers do treat them like zebras.

Did you see my retweet of the wheelchairs parked in parking bays?

A wheelchair blocked each parking bay with a note along the lines "Back in 5 min" etc.

Turning over in my mind how the road space might legitimatly be filled with kids & 'parents' on bikes & on foot 'arriving' at the school and preventing this parking and turning...