I try to avoid kneejerk council bashing. But this is a three-strikes-and-you're-out kind of moment. 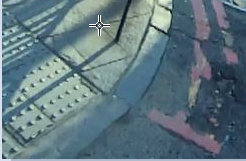 In the 1990s, a set of guidelines were agreed to make our roads and pavements more accessible for those with visual impairments.  Key among these was the use of tactile paving to signal when road crossings or other hazards were being approached.   A fundamental principle was that they must be used consistently in order to ensure that pedestrians with visible impairments could be confident about what they were about the encounter.   In these circumstances, the wrong 'signal' could be disastrous, and at the very least such uncertainty could discourage those with visual impairments from maintaining their mobility.

There are several basic types of tactiles.  Blister paving (above) is used at to indicate where a footway ends and a carriageway begins - this is the little round dots that we are all used to seeing at zebras and toucans.  These are red for controlled crossings and buff for others - eg side streets.   And there are corduroys - which as the name suggests are lengthwise bumps.  There are also two kinds of corduroys - humpy ones for pedestrian warnings at the top of steps, and wider flat-topped ones that lead into cycle paths on shared use paths, so that pedestrians know (a) that there is an adjacent cycleway, and (b) not to stray onto it.

But after using the wrong sort of corduroys on the North Meadow Walk improvements, and the Broomhouse path works, they now seem to have put blister paving in where they ought to have put corduroys.  There's a link to the picture here - it's the one at the top, labelled "Tactile paving, coming from Maidencraig Cres".  I've asked permission from the author to use his pic, and will add it if that is received.  I've not seen it, but knowing that junction and looking at the picture, it is pretty clear that the blister paving is no where near the carriageway edge/where a kerb might be that blister paving would substitute for.

EDIT: I've just been contacted by council and told: "the tactile blister paving is only being used on the approach to the carriageway entrance on Maidencraig Crescent. This use is consistent with the relevant tactile paving guidance to warn pedestrians as a footpath merges into a carriageway at the same level.  They are slightly set back to accommodate the alignment of the new decorative gate/fence which is to be installed."  I'm still not convinced. i've not seen blister paving used in this way, and the guidance suggests that it should be where a kerb would be ie replacing a kerb, where there is a crossing. But then I'm just an amatuer.  /EDIT

On the one hand, this is minor and relatively easily corrected.  But it is symptomatic of a wider problem.  Why are the council officials drawing up these plans not aware of the correct materials and guidance?  Is there anyone in council with responsibility to check for pedestrian accessibility issues?  Surely this should be mainstreamed such that anyone involved in such planning should be aware of the correct usage?  And finally, if contractors are mis-interpreting the plans, why is this not being caught before implementation?

This is yet another example of CEC having good policies, but not good implementation, but that's another blog-post....