Re-uniting Edinburgh with its coastline

Edinburgh's a strange city in many ways. It's a city with a port, not a port city.  This is in part a function of history - Leith  only became part of Edinburgh in 1920.  But even despite the massive growth in the city, this distinction remains visible not just in planning and transport networks (in fact Leith is well integrated), but in people's behaviour.

I grew up in a port city, my mum grew up in a port city, my parents currently live in a port town.  And, I always thought that if you live in a port, one of the things you do is drive (or walk or cycle) along the waterfront and check out what is going on  -- not just the arrivals and departures of ships, but also the weather, the tideline, the changing skyline.  But in Edinburgh, this is not an easy or natural thing to do.

Some parts of it - notably Cramond and Portobello - have fabulous infrastructure. But in between, despite fascinating nooks and crannies, it can be difficult to find your way, and certainly not suitable for unconfident cyclists, or even pleasant for walkers.   Even the John Muir way which is being celebrated and opened today  goes inland through the meadows - a lovely walk, but an odd inland route for a coastal city.

But there's a lot of potential, as we discovered when we were invited to join this 'study tour' of the waterfront (yes, that's us, definitely NOT going 27 mph). 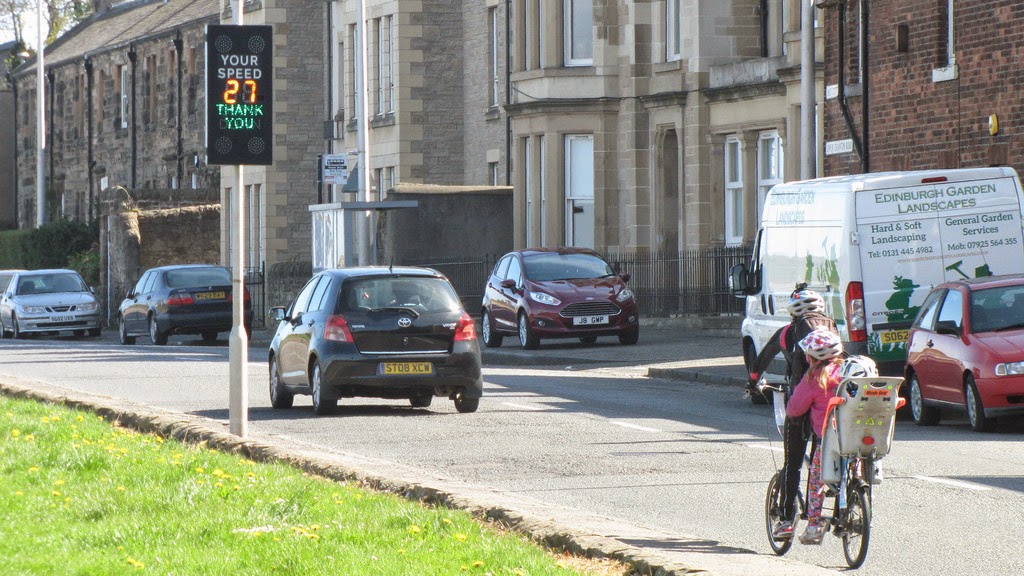 It would be easy for the council to join up the bits and pieces and make a marketable 'round Edinburgh' path, mostly off-road, with spectacular views, industrial archaeology, cafes, pubs, playparks -- something for everyone.

The work currently being undertaken to link up Edinburgh's NEPN with the canal, the city centre and the south/east paths network is going to transform the city, but our next target must definitely be to build in the coastal network, enabling proper 'round the city' rides for everyone.

Keep an eye on http://edprom.wordpress.com/ for progress - and add your ideas too.