@EDIworstdrivers has been an excellent addition to Edinburgh's social media scene over the past year or so.  On twitter and facebook, the account attempts to keep tabs on dodgy drivers.  Much of the time it is just pictures of people who either don't know how to park, or can't be bothered parking correctly.

But every so often, they have a go at cyclists.  And while I am happy to see dangerous or illegal cyclists being brought to book, the account is often very revealing of how drivers just don't get cyclists. This came up in an earlier post about shared space. And lately they had a go at cyclists riding the wrong way down a one-way street.  The street in question is the east end of Fountainbridge - towards the bottom of the picture below - in yellow - the one way stretch is 200 feet long. 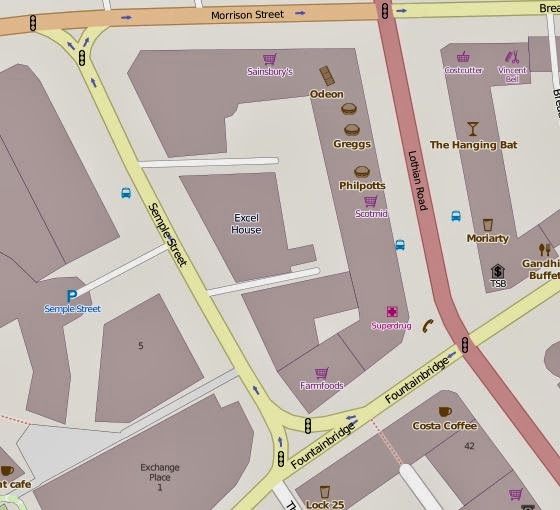 I am by no means condoning cyclists doing this. It's stupid and illegal.  But there is a logic to their madness.

First - the council has a policy of introducing contra-flows on one-way streets, but has not done so.

Second - it's not actually as dangerous as it looks.  Because of the wide pedestrian build-out, most of what they are riding up is the hatched area shown below.

And of course, that hatched zone also shows where a contraflow lane could go (or perhaps, where the parking could go if the contraflow was put in with a nice segregated lane against the pavement).


Third, and most importantly, not only is the alternative route massively inconvenient, it is also bloody scary. In fact, it's so bad that that cyclestreets tells people to get off and walk rather than go all the way around, . 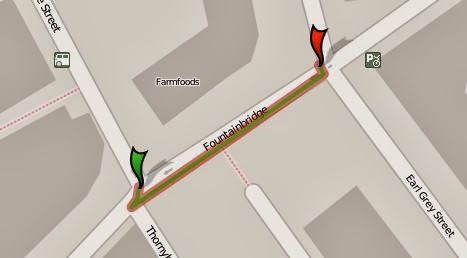 To get around to Earl Grey Street legally (and without walking), you have to get into the middle of the ASZ or change lanes while riding up the middle of Semple Street, which has a terrible surface, and jostle with the buses to get into the right spot in the ASZ at the other end.  Then, you again have to jostle with vehicles on the four lanes of Morrison Street to get into one of the two right turn lanes - except that it is impossible to see the lane markings - and then get out onto Earl Grey street which is six lanes wide at this point.

So, all that for 200 feet (60 metres) against traffic?  Again, I'm not saying I'd ever do it, but I do understand why it makes sense to some.

What I don't understand is why it doesn't make sense to the Council to introduce contra-flows, as promised.

You say there is logic to the cyclists' madness, but what is the logic that dismisses the three points you raise? Specifically, it's not dangerous and there's no alternative, so what logic has been employed to argue against the council's policy of introducing contraflows on one-way streets? I shudder to think.

Sara, what do you think can be done about it?

I doubt there is much logic, just that the work if bringing in a contra-flow is cumbersome, bureaucratic and expensive.

Yes, I suppose that is why Cycling: the way ahead suggests that "introducing" a network to the point where it functions is "a prudent course to follow." The point being that bureaucracy and expense ought to have no bearing on this issue.

This is how they do things on the continent:

1. Think in terms of a network
2. Plan the network
3. Study the network
4. Introduce the network
5. Develop the network further "on the basis of priority interventions and a timetable."

This strategy is still running its course in, for example, the Netherlands and Germany.

But not here. We do things differently in this country and yet, funnily enough, we're not in the least bit surprised that no other country has thought to copy us.

Regarding step 2, I have made a very rough and ready start to this process here. I intend to keep adding to it, and would welcome the opportunity to work cooperatively on this.

Your google map looks great. have you thought about sharing it on http://citycyclingedinburgh.info/bbpress/ ?

Thank you. I'll follow you up on this suggestion.