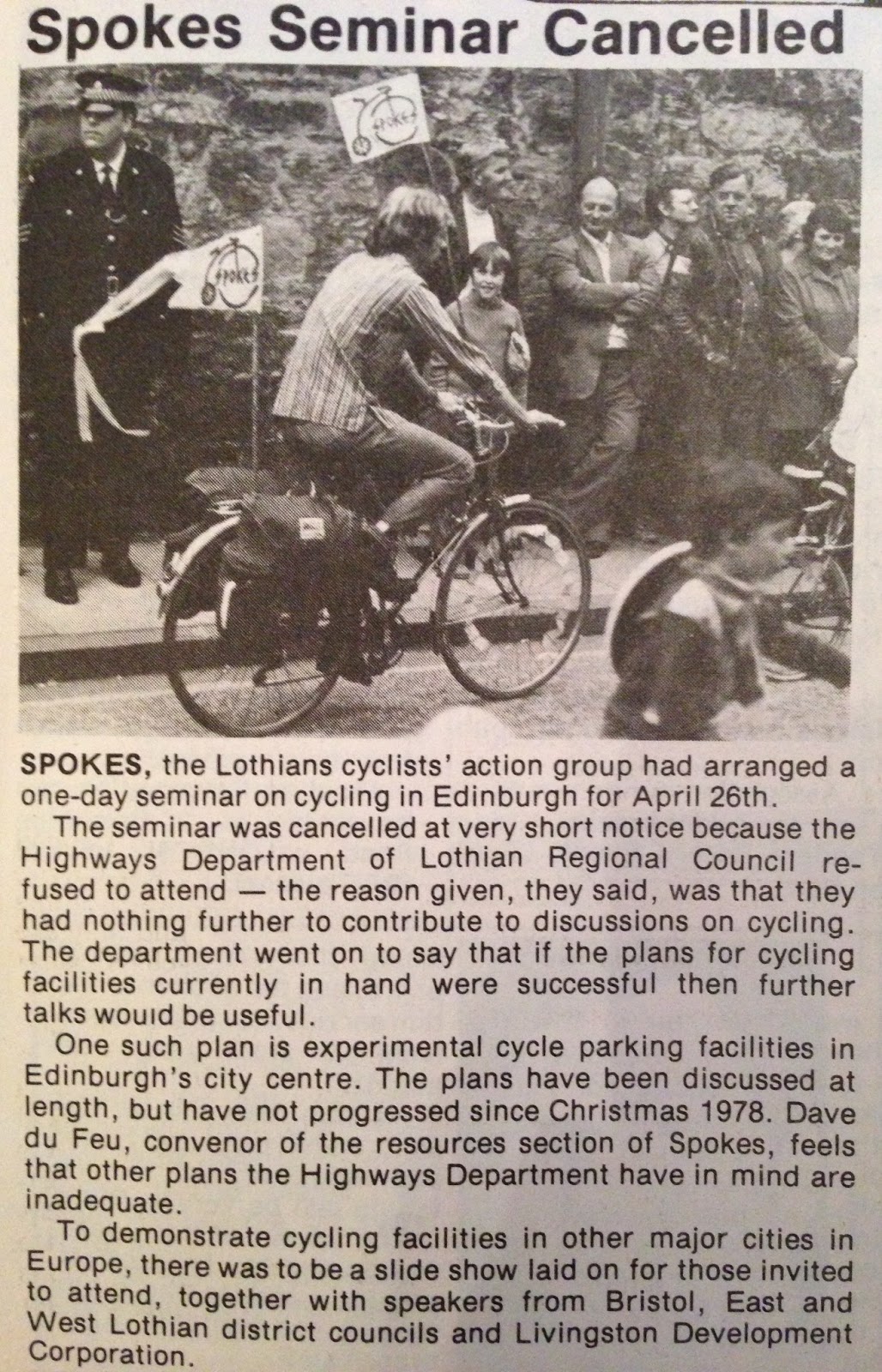 I was sent this picture earlier today.  It's a salutary reminder of how far we have come.  On Monday, Spokes is holding a public meeting about 'the future of local transport', and an MSP and a local councillor are speaking.  The MSP is co-convenor of the newly created Cross-party group on cycling, while the Councillor is deputy transport convenor, with a specific responsibility for cycling.  It's a long way from local government with no real interest in or commitment to cycling, that led Spokes to cancel their 1980 meeting.

But despite all the remarkable changes -- most visible to many of us in the gritting of cycle paths this winter -- one conversation keeps recurring in different contexts.  And that's people saying - where's the blockage?   Is it the officials or the politicians?

Because somehow, despite the budget commitments, the explicit commitment by many Councillors, the good-natured cycling officers, the transport forum, a much lauded Active Travel Action Plan (ATAP), not much has really changed for cycling in Edinburgh in the 5 or so years that I've been back on the road (I was too scared to cycle here when we first moved here, despite having cycled in Canada, England and Zimbabwe).

The launch of the ATAP more or less coincided with my first foray  into cycle campaigning - at a Spokes meeting, where I suggested that maybe cyclelanes with parking bays painted on top of them shouldn't be counted in our grand total of 'x number of miles of cycle lanes'.  This seemed radical then, but I'm not sure it was, nor that it should have been.  When I pursued the issue, the then transport convenor told me that it was no longer council policy to put cycle lanes in where they could be parked on.

But where have we gone since?  There are no on-road segregated paths.. There are no mandatory cycle-lanes (ie ones that cars must stay out of).  Instead, we get the 'quality' bike corridor, where the painted lanes sometimes go around parking bays instead of straight through them.

I think this captures the issue that people are trying to get at, when they say 'where's the blockage? what is holding us back'?  There are valid points made about budgets, about a shortage of manpower, and many other issues that explain the failure to implement more than a tiny fraction of ATAP so far.

But the bigger question is, why has our vision stayed so stagnant?  Why are hesitant commitments to 'consider' cycle infrastructure only accomplished after great lobbying efforts?  Why is cycling infrastructure still not integrated into all planning?  It remains an after thought, a box-ticking exercise - despite all the good will at Council.

All this leads me to think that we need a cycling champion to overcome these roadblocks.  To knock heads together. To change how we think about cycling and to connect up all the synergies.  I'm not usually enamoured with this very English approach to policy-making, but if the alternative is wasting the enthusiasm and goodwill that is currently present, then I think we should consider it.  I suppose we'd need to call it something more Scottish though - how about a Cycling High Heid Yin?

In the meantime, I'm very much looking forward to this week's Spokes meeting.
Posted by Sara Dorman at 9:26 pm