I've been pretty sceptical about the George Street cycle lanes since they were first proposed. But I thought I should at least try them out rather than just critiquing from afar. Last Saturday seemed like a good opportunity.  We again had to go to Jack Browns, so the stoker and I saddled up and made sure we had the helmet camera ready and loaded.

It's perhaps telling that cycle streets definitely doesn't recommend the route that I used (my route is shown ikn red below), even though it has the most/best cycle specific infrastructure on it, as well as the most direct route. It's a mile and a quarter through a vibrant shopping area with high pedestrian footfall, a bus station, a train station and a tram route, surrounded by parks and historic sights.   You'd think we want to make this a pleasant journey?  Even encourage people into the city centre? 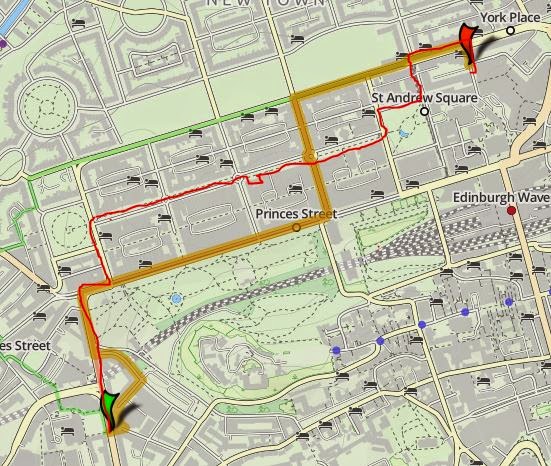 As you can see I went for the most direct route, which is also along the best cycle infrastructure - in theory. What I did was to head from Lothian Road onto the new George Street cycle lane -- requiring crossing tram tracks at speed and then changing lanes.  This would be okay if it was clear what to do, but I was frantically trying to figure it out.  The cars and buses were surprisingly patient - probably because of my stoker - or because they didn't know where to go either. I've speeded this video up a bit too much at 16x, but that means its only 15 seconds long.


Once on the George Street lanes, it was fairly smooth sailing - once the furniture was moved.  the first couple of crossings are fine, then there's the slightly odd roundabout thing where we switch from one side of the road to the other - basically okay if the traffic's light, but I was at least expecting that.  can't imagine cycling that blind.  And finally, the cycle-specific lights.  Fine as far as they go, but quite a long wait?

Finally however, we get to what I consider the coup-de-grace -- we are directed onto the pavement (I think) then around the north side of St Andrew's square (I think), then onto some more pavement, then across the tram tracks (oddly there is a bike light suggesting the crossing is a toucan, but with railings on the island, I'd recommend walking), then down Queen street, which is 4 lanes + trams, I think, then across the tram tracks again...

Not my idea of fun.   On that ride, and the return leg a couple of hours later, I saw precisely 2 cyclists.  Unlike others, I had no issues with cars driving or parked on the lane.  and the pedestrians were pretty polite too - if a bit baffled by it all.

So, should I be being more positive about it?  Grateful that the council is thinking out of the box? Happy that they're taking segregation seriously?  Today's local paper quoted me as saying ""'It’s an attempt 2 balance so many different interests, but it’s not suited any of them' .  You can read the rest of the story here.  It also sparked a polite debate on our cycle forum.

I really wish I could be more positive and see it as a 'start', but I can't.  The George St lanes serve no purpose at all in making the city centre more cyclable.  Those who are more optimistic may hope that this first step convinces the local businesses that they can still function - thrive even - on a pedestrianised road, or next to cycle lanes.  If that is the outcome then it will be positive. But I don't think we should pretend that what has been created is some sort of cycle infrastructure, because it clearly isn't.
Posted by Sara Dorman at 10:36 pm

It seems to lack what a lot of other cycling infrastructure in Edinburgh lacks: Proper signs! The city is littered with little bits of cycle lane etc. Going nowhere, or at least where they go is not made clear. Shared routes are often either not indicated, or only at one end. White lines for a cycle lane, but no indication of where it starts and stops, or warning to pedestrians that they are sharing with cyclists. Probably it's all really obvious, if you were the one that drew up the plans!
All routes should be test ridden by someone from the planning department, but who never saw or discussed the plans for the route!

I ride it more or less daily, and it does make that part of my journey more pleasant, but I was already riding on parallel streets and dealing with the mess at either end of this in some way. I still can't figure out what you're supposed to do at the ends. Westbound there's a sign that suggests all cyclists should turn right, which I suppose does sort of link up with some infrastructure. The vast, vast majority of cyclists do what I do - ignore the westbound switchover, ride on the usually pretty empty road side, and turn left onto Charlotte street. I still haven't figured out the intended route from Dublin Street.

Pedestrians waking out without looking and drivers (who range from entitled to sincerely confused) are a constant issue but I'm hoping that the bollards will help with the latter and that eventually someone will realise that furniture blocking sight lines is counter productive.

But without fixing the ends so that they don't involve crossing lanes and right turns (or, worse, dismounting and using pedestrian crossings) this will never be appealing to people who aren't already confident cycling in city centre traffic. It's nice to have a lane where you can ride 2 abreast and converse (mostly because of the emptiness rather than the width!), but I have no idea how anyone thinks this will encourage cycling.

@sandybeachcat I like to think that quality infrastructure ought not to need signs. i ought to be clear from the design what you are supposed to do...

signs are okay for pedestrians, but on a bike i'm usually moving too fast to read signs (they're usually the same size as the ped ones), and the poles just get in the way of the peds.

@Ysolda "The vast, vast majority of cyclists do what I do - ignore the westbound switchover, ride on the usually pretty empty road side, and turn left onto Charlotte street."

agree with your conclusion as well. it's not even a token gesture.

I don't think we should criticise it because it doesn't link up with other infrastructure (yet), because too often this argument is reversed: In the well-publicised Perne Road roundabout in Cambridge one big argument for NOT providing cycle lanes was there are no cycle lanes to link up with. If missing links is an argument against infrastructure, then we'll never get anywhere. We have to start somewhere.

I agree that the situation at the ends is terrible, but I also suggest we accept for the moment that this is work in progress. If George Street becomes a popular place, then there is a much better case for redesigning the East and West Ends too.