Yesterday I got an email from an old friend saying "what are you going to do for your birthday? Go on a bike ride?".  At first I thought he was taking the piss, but the more I thought about it, the more I liked the idea. I've been reading about people riding the old railways here,  so, with the grandparents kindly agreeing to look after the kids, we set out.
The track runs through Harbour Grace, but there's a big washout on the Carbonear side and we'd never managed to walk this far with the kids and didn't know if it was circumnavigable or not.

After that it was pretty smooth sailing.  Although the surface of the track was a lot rougher than what we're used to with some massive puddles, and the branches are starting to grow in over the top, the level surface made pedaling easy enough - even though by this time I'd discovered the saddle on my bike wouldn't stay in place, so I was standing for most of it. We caught a few glimpses of the ocean through the trees - first Bristol's Hope settled 1618, but better known for its association with Peter Easton  the privateer turned pirate turned nobleman. 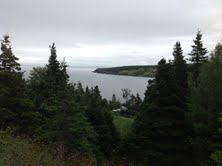 And then, we quickly rounded the Cape and were seeing glimpses of Carbonear. 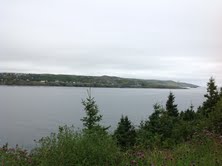 After reaching Carbonear, we turned back on the Southside road which rapidly became an unpaved path, rode back until we crossed the track and followed a series of backwoods paths back to Bristol's Hope. 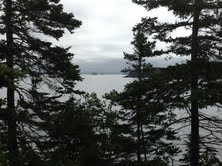 And then down to the Barachoix, which was great fun to cycle.  Officially it's called 'Beach Road' and if you look closely at the pic on the right, there's a stop sign, and everything. 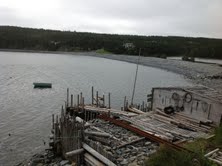 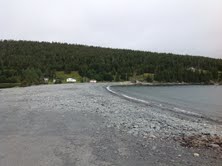 Beach road turns out to have been closed to motor traffic on the other side, we had a lovely traffic free route up to Bristol's Hope, then followed another lane up behind some houses over onto the Barrens - formally called 'Mosquito Hill'.  This took us past the one definite land mark in the area: 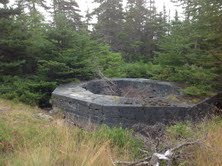 We know its WW2 vintage, but does anyone know what it is?

This part of the ride was probably the easiest terrain - mostly logging trails, with some tree roots, but fairly clear over head.  (although also the most confusing if you don't know your way around). We saw patches of raspberries everywhere, and large chanterelles growing along the path for ages. 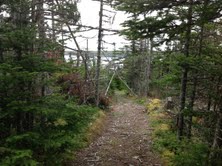 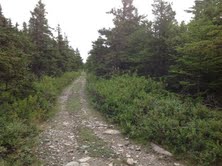 And then the most awesome grassy run downhill into Bear's Cove, and Harbour Grace. 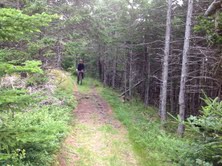 This was the start of it, and then it widened out into thick turf running along the shore, and the sun came out. Just glorious.

Neither of us had ever ridden off-road before, but this was fun! A lovely Birthday ride. Thanks Michael for the suggestion, and to my folks for the babysitting.

Happy belated birthday! I'm very jealous of your non-kids ride - that's something we aspire to again one day!!!