The bins (part 2): is this what a victory feels like?

It's been a depressing day in a depressing week.  This was symbolised today  by people congratulating me on my 'victory' and getting a 'result'. That result can be seen here: Missed it?  It's that little white line around the bins, that seems to be magically keeping them in place.  It's the result of several weeks persistent lobbying.  Earlier in the week, it has looked like this: 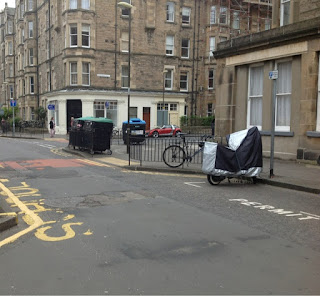 As chronicled in more detail in a previous post, this was an on-going quest, actually started by someone else, to remove the recycling bins from the sight-lines of a pedestrian crossing in front of a primary school.

But have we really fallen so low in the stakes of civic activism that a little white paint around some bins (with promise of a more permanent corral when the pavement is redone), is counted a victory?