A letter to my councillors part 2

I'm less and less sure that there's really any point to this.  Even if they do change the proposal tomorrow, it should never have gotten to this point.  All that will result is that the council will be pilloried for caving in to the 'cycle lobby'. When really they should have got it right at the proposal stage, consulted properly, and then brought an idea  that all users could enthusiastically back to the full council vote. Transport committee (apologies for original incorrect point here - I need more sleep) 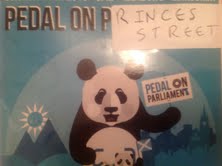 Anyway, here's the letter for what it's worth:
It is very disappointing to note that Transport Committee is proposing to  go ahead with its original proposal, albeit for a 12 month trial.  Surely, if this is really a 'trial' it would make sense to also trial a west-east cycle route?  Then, if it proves unworkable or unsafe, this will be clear in planning for the permanent changes?
There are three other points that I hope you will consider:
1. The consultation survey was flawed. In particular it asked if people approved of a 'one-way system for buses and taxis'  but did not mention that cycles would also be included within it. It is therefore difficult to understand how the transport committee reached its decision - it does not appear to be on the basis of 'evidence'.
2. Princes St is designated as a 'core path' which permits access for cycles and pedestrians. It surely goes against the intent of the core path network to make this one-way only (it might indeed be illegal).
3. This further highlights the point I have made to you previously, that it is council policy to provide a cycle-contra-flow lane on one-way streets.
The proposed plans thus seem to fly in the face of both Core Path legislation and the council's own ATAP. Surely in the light of all this, it makes more sense to have a bi-directional cycle path along princes street? Or a cycle-path along the north side to allow easy access to shops?
As a member of the Transport Forum and the Cycle Forum, I have hoped that the council really does take its commitment to Active Travel seriously - I hope that my faith in you on this point is upheld by your decision tomorrow.
Posted by Sara Dorman at 10:45 am

Email ThisBlogThis!Share to TwitterShare to FacebookShare to Pinterest
Labels: transport/planning