Save Pippy Park? We should have called it Save Paradise 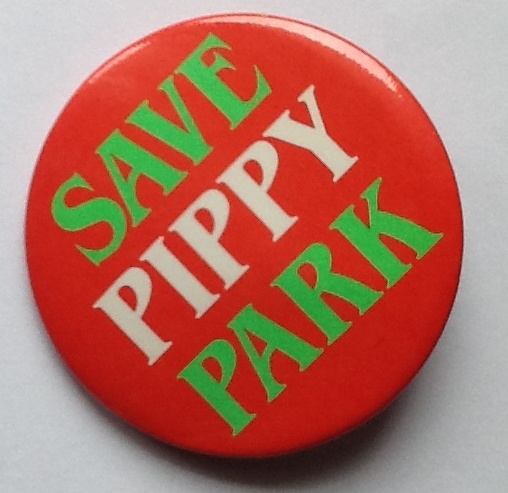 With anti-road campaigns back on the media agenda this week, it seems a good time for this post....

When I was in my final years of secondary school and then uni, I got involved in an anti-road campaign in Canada. It was so long ago that there's not even anything on the web about it.*

The provincial government had reached a deal with the federal government to close down our railway and build roads instead.  So, they decided to build a partial by-pass of St.John's, that would cut through the middle of Canada's largest urban park, a semi-wilderness area that also included the city's water supply.  The new road not only allowed civil servants to get directly to the main government buildings (House of Assembly + government offices), but it also 'opened up' huge areas of land that were then developed for sprawling mega-shops and business parks, which meant that property developers and the construction industry were keen on it too.

Well, despite a lot of campaigning and legal battles, we were massively outflanked and lost our case. The road was built, and while the park has basically survived being dissected and there have not yet been any water poisoning scandals, there are many deaths (including of cyclists) on the road.

As we predicted, traffic in town is even worse, and worst of all - 'commuter-belt' areas that mainly used to be fishing communities - are now swamped under unbelievable scales of subdivision building, because more and more people live outside town, given how 'easy' it is to get into town on the new ring road, and that real estate prices and taxes are lower and planning seems less stringent.  One of the most affected is called 'Paradise'.  Looking it up on wikipedia reveals that the population has grown by 41% in the 5 years to 2011 - the fastest growing municipality in Atlantic Canada.

This experience was dispiriting enough that it took me nearly 20 years to get hooked into another campaign.  But increasingly I look back on it and think 'we were right all along', even if on some level we mis-directed. The real victim of the road was not my ski trails, or green space in the town, but the surrounding areas, crushed under urban sprawl, and the intensification of car-dependent households.

*Ironically, the only on-line reference I can find is to to someone else looking back at it, who now thinks the road is fabulous.
Posted by Sara Dorman at 9:28 am

Email ThisBlogThis!Share to TwitterShare to FacebookShare to Pinterest
Labels: transport/planning