You'd be forgiven for thinking that Edinburgh doesn't grit or clear cyclepaths, Even the best used ones have been covered in thick layers of leaves of late. But in fact, quite a number of paths are considered 'priority 1' routes for gritting. Now, I must admit, I'm not quite sure what that means. I do know that 'non priority 1' routes aren't gritted on weekends, or before 7.30am. But I'm not quite sure what a priority 1 is supposed to merit - presumably the general idea is that if there is an ice or snow warning, then they are supposed to be gritted. And given that many of them are key commuting routes, you might expect them to be cleared by 9am on a work day, or to have been gritted the night before preventatively.

But no. Over the weekend, the North EdinburghPath network ground to a halt. So, going to see my daughter in a panto, which would take about 30 min max by an off-road route, became an hour-long slog by bus, involving both kids getting travel-sick. We really didn't need that. Not a nice start to Advent.

And on Monday, and then Tuesday, I discovered that Leamington Walk was decidedly untreated. It wasn't shiny ice-rink territory, but there was at least one off. And I went very, very carefully despite having my studded tyre on.

The thing is, these *are* priority 1 routes, and used by hundreds of cyclists and pedestrians everyday (we'd have better figures if the long promised cyclecounter had ever gone in...).

So, I've been tweeting and emailing and generally causing a commotion. To some effect. Apparently some of the 'logistics' relating to the implementation of gritting hadn't quite been worked out. Lots of lovely twittering folk at council have promised to 'look into it'. The final straw for me was yesterday, when they re-gritted the already clear north-most 200 metres of Middle Meadow Walk (coincidentally the one off-road path with commercial premises on it?), but did not continue on to the rest of MMW,or any of the adjacent and joined up priority 1 routes.

However, this morning, they did grit Leamington walk, as you can see below. Victory? I'm really not sure. 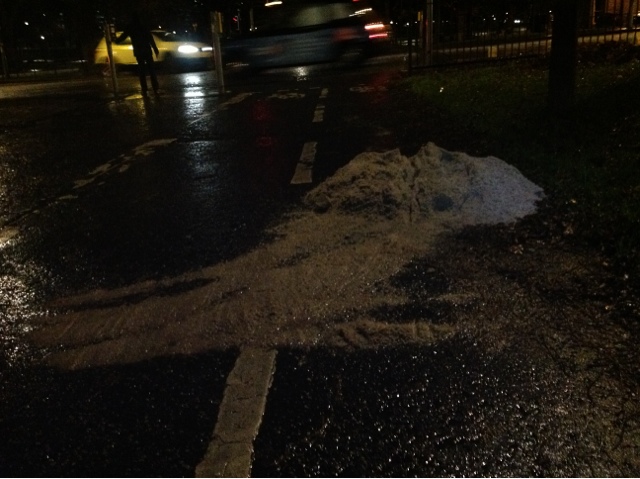