Why are we still building infra that's not suitable for 8-80 year-olds?

Another in a series of blogposts 'inspired' by trying to get my kids to half-term/holiday activities in Edinburgh.....ie child-friendly locations that attract families from all over the city.

This Easter, I've been cycling with my kids to a nearby local school for bike camp.  There are two possible routes. Both are more than half on off-road cycle paths. The first one, which replicates my commute is flat but to get there we have to go through the worst intersection in Edinburgh.

The kids have voted with their legs and prefer to climb a hill to avoid that junction.  The nice off-road cycle path that runs through Bruntsfield links and along South Meadow Walk takes us across one well designed intersection with a toucan.  But then we come to the junction of SMW with Middle Meadow Walk (MMW), Melville Drive and Argyle Place.

This is one of the most used bits of cycle infrastructure in Edinburgh, and as a result was redesigned a few years ago.  At the time I said that it was not well-designed for pedestrians (unsurprisingly, they ignore the dropped curbs and follow a desire line that takes them straight across the cycle lane).   It's better now in some ways for cyclists who want to turn onto or off of MMW.  But if, like my kids, you need to continue on SMW, it's a nightmare.  It's a classic piece of infra that sort of works for grownups, as long as you can swivel your head simultaneously in five directions and start at a sprint.  But it's nearly impossible for kids to judge the on-coming traffic - cars, buses, lorries, and bikes, coming at them from multiple directions. 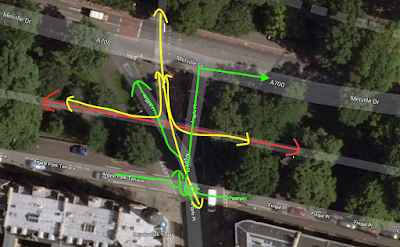 In the above - we are the red line trying to continue on the cycle path, cyclists are yellow and cars are green. What you can't see is that it's not a straight line.  First we cross the one way slip road for cars joining Melville Drive, then we hang about in the middle of the cycle infra, trying to spot cars turning in various directions, while also dodging cyclists and trying not to block pedestrians who are oblivious that they're not supposed to take the most direct route to their crossing point.

There is no way the kids could do this on their own, and no signalled crossing anywhere nearby that they could dismount and use either.

Which begs the question 'WHY?"  I suspect the answer is that the council's focus is on commuting routes.  Ignoring the 5 schools in close vicinity, the playpark, the football pitches, etc.

I don't have the energy to go look at how much this cost.  It's certainly better than what was there before, but we pointed out all these shortcomings when it was in the design phase.  Which raises the bigger question: why are we still designing and building infrastructure that doesn't meet the needs of all its users?  why are we building 'slightly better but still crap' infrastructure? and what will it take to move past this bodged half-way house?
Posted by Sara Dorman at 1:33 pm