I spent last week looking out my kitchen window at family groups cycling down the middle of the road, mums with their handbags dangling from their arms; sober, sedate older citizens cycling home with their newspapers and loaves of bread; groups of early teenagers zooming around *without helmets* on their own. In fact, the first 48 hours I was there I didn't see any helmets at all, despite seeing dozens of cyclists - far more than I saw moving cars.

Amazingly, I wasn't in Holland, or Paris, or Copenhagen.  I was in Scotland, about 50 miles from Edinburgh, in Elie. 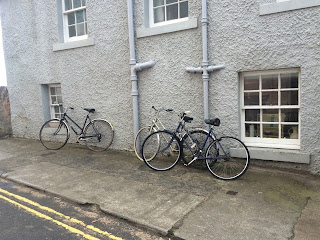 Elie's a little seaside village, popular with tourists, and even more popular as a holiday home or vacation spot for the well-heeled.  But the narrow-crowded streets make driving a nightmare, so families bring their bikes, or rent bikes for the duration of their holiday, and cycle back and forth to the beach, golf courses, and tennis courts.  I particularly liked the moment I peered around a narrow corner and was confronted by 3 lads in wetsuits and flipflops, cycling along casually with their phones out, while a car waited patiently behind them.  Or looking out the window as it got dark, to see the cheeky grin of the 8 year old staying below us, who had cycled home at 10pm, and had clearly left his parents some way back with his little sister.

Elie is a privileged space, and perhaps not easily replicated outside Centre Parks, but it was nonetheless immensely refreshing to see that *in the right space* parents were willing to hop on their bikes, let their kids have some freedom, and leave their cars at home. 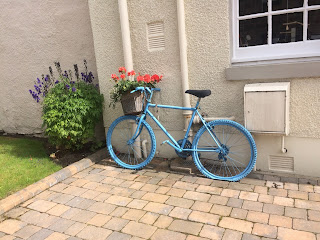 The elderly man probably my uncle!