How to choose a kids bike...or why it's not just about wheel size

When we go cycling en famille, we are quite often all on 20" wheels - an Islabike Beinn small, currently ridden by my 5yo; my Dahon Helios folder; and our Circe Helios tandem.  But there is a huge disparity to our pedalling rate. The little guy's legs go around and around, even when the rest of us are coasting.  We noticed this when our daughter rode the same bike, especially when we started doing longer rides.  But with the 5yo desperate to keep up with his big sister, he's more often out of the saddle, than in it.


Which is okay for short rides, but pretty tiring when he's doing a decent 15 miles around Edinburgh's old railway paths, which tend to be pretty flat. 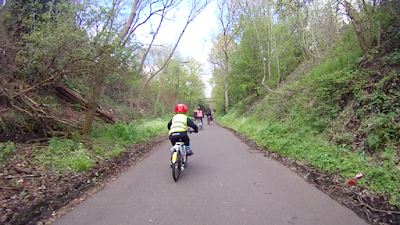 What we discovered when we discussed this apparent paradox, is that contrary to general opinion, wheelsize and the number of gears on your bike really don't make much difference. It's crank lengths, and, perhaps more importantly, gear ratios, that we should be worried about.

Kids bikes are geared low to make it easy for them to start pedalling, go up hills, etc.  So my guy can sprint up hill, but struggles to keep a steady pace on the flats, because he 'spins out'.  I wondered if any other comparable kids bikes had higher gearing, but that data required some digging, and I thought I'd share my findings*:

This suggests that Frogs have higher gearing on their first bikes than Islabikes do (my kids just rode generic second-hands at this stage, so I can't compare).  But, when you get to geared bikes for 5-6yos, there's not much difference.

I'm intrigued though by the Frog 58, which with a 34T chainwheel looks like a much better 'next bike' for my 5yo than the Beinn 20 large, or the Luath 24.  His sister rode the Beinn 20 small until she was 8, but I have the feeling he might be moving up sooner than that.

However, we've also got an expert bike consultant involved who's looking into retrofitting a bigger chainset to the Beinn, if we can just find one with small enough cranks.

*important caveat - I just pulled this data off the websites; please let me know if you spot anything wrong!  I've not included all their makes - I'm particularly interested in the 5-6yo demographic. Obviously, none of this should be taken as any sort of endorsement of either islabikes or frogs.I've not dug out data on kids bikes other than Islabikes and Frogs because their bikes are the smallest weights and their brakes are designed for small hands, and my kids both have tiny hands.