The good, the bad, and the ugly of Edinburgh's dual network

There's been a lot of criticism of this approach, which is predicated on the assumption that fast, aggressive cyclists will stay on the roads and less confident cyclists will take 'quiet ways'.  This is of course a false assumption - 'confident' cyclists are just at much as risk from a bus that fails to indicate before changing lanes,  a driver who overtakes too closely, or a left hook SMIDSY.  Good infrastructure will be used by all, as we're seeing in London.

But I've defended Edinburgh's dual network approach because it was based around linking up our existing, yet fragmented off-road network - mostly based on old railway paths, parks, and the canal. While it would have been nice to start off by redesigning the big arterial roads that feed commuters into the city, the pragmatist in me valued the decision to prioritize linking up the existing well-used off road segments. 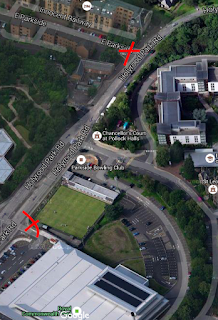 The first major bit of this work has been the Meadows-Innocent path - which is roundabout, indirect, and somewhat too narrow, especially if you ride a tandem.  But my kids love using it, and if I tell them we're going that way, I get a big cheer.   So last week, when cycling the two miles to the Commie Pool with both kids several times, it made sense to go that way.  The first quarter of the journey is pretty nerve-wracking, but once we get to the meadows we're on segregated paths and very quiet back streets (the sort we almost never meet a car on).   Except that the pool is a few hundred metres past the entrance to the railway path.  And that means that we need to make a right hand turn uphill across 4 lanes of fast-moving traffic - to get to one of the city's biggest sports venues.  It's also right next to the main halls of residence for the University of Edinburgh.  Getting back is just as bad.  Traffic flows steadily out of Holyrood Park, and turning across it at rush hour is fraught with stress.  There is a two stage pelican crossing, but it is almost exactly in between our exit and entrance from this short stretch of road - marked by the two red x's on the picture to the right.

Of course, we could get off and walk, although manoeuvring kids and bikes along pavements and through a narrow central island with railings and pedestrians is not one of my favourite things to do.  But it's frustrating to get so close and then encounter the deeply unpleasant, car dominated void that is Holyrood Park Rd.

Maybe the network will be extended.  But to my mind, this example shows up the very real limitations of the 'fill in the gaps' method of cycle planning.  Once the Canal-to-Meadows section is built, we'll have a protected route pretty much from our front door to 200 metres from the pool, but the last few yards will continue to be unpleasant and dangerous.   I've blogged before about how 'car-friendly' the pool is, but this really rubs it in.

The crazy thing is, despite the new infra being roundabout, narrow and indirect, it is a huge improvement on the route we used to use daily taking a toddler to nursery in a bike-seat.    But it makes the continued gaps all the more obvious.
Posted by Sara Dorman at 8:36 pm

Especially since the road leading up from Holyrood Park past the commonwealth pool is ridiculously wide. It could easily a segregated cycle lane or two.

The problem of the "quiet route" approach becomes even clearer when you come from the South. There are no "quiet routes" from Cameron Toll, you can only go up Dalkeith Road or Mayfield Gardens/Monto Street, and before that you somehow have to cross the Cameron Toll/Lady Rd/Liberton Rd chaos.

There simply are no quiet roads from Liberton/Gilmerton/Inch to the Commonwealth Pool, and no obvious space where they could be built.

So unless protected lanes are built along major arterial routes like Dalkeith Road, there is no way quiet backstreets can fill the gap and actually enable people to cycle.