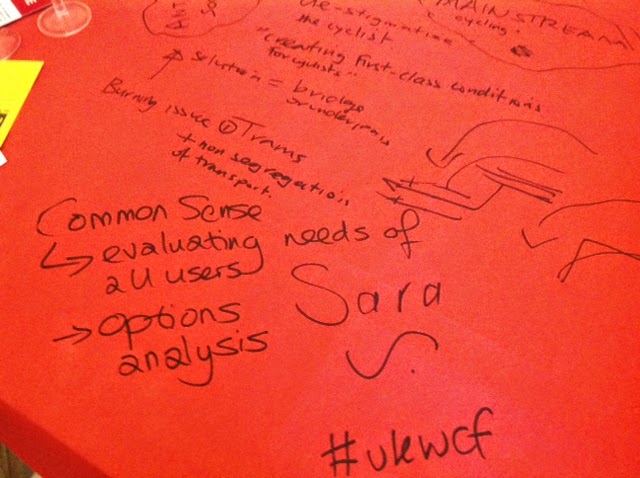 I rather unexpectedly found myself facilitating a table discussion at the first UK Women's Cycle Forum on Saturday.  Have been increasingly aware since then of all the things I did wrong - I didn't get people to introduce themselves, I didn't keep clear notes, and I didn't report back comprehensively (probably more....).

So, by way of amends, here's a quick roundup of what was despite all that, a pretty good conversation.

We started with the burning issue of TRAMS, highlighted by a participant who now struggles to get her daughter to school safely because of the shambles at Haymarket.

But we agreed that the trams project was really just symptomatic of the way in which cycles (and cyclists) are sidelined, not taken seriously, or just added on without much thought.

One participant at our table expressed concern that 'segregated' infrastructure risked reinforcing this even more - by pushing cyclists off the road onto second-class tracks.

This is exactly why I prefer to talk about integrating cycling into transport planning, not segregating it.  It's not just about cycle-tracks, but also about redesigning intersections and much more.

But this sort of planning can't come as an after-thought, as is so often the case; nor can it be funded with the money left over from road-building.

For cycling infrastructure to work, and be properly inclusive, it needs to be mainstreamed into all planning, not compartmentalized off into a little corner.

I do think there is hope here. Despite many negative examples, some aspects of planning in Edinburgh does seem to be moving towards considering the needs of all users, and balancing the different interests to build decent infrastructure.

The #UKWCF was a really positive, optimistic event, so I'm going to hold out hope for these changes.

Hopefully when we reconvene next year, we'll have seen some more positive change.

this reads like a true interpretation of the discussion and subsequent conversations at our table.