Why are developer-built links so dire?

South-West Edinburgh is bifurcated by the Western Approach Rd.  Created by the removal of a train line, and lacking any cycle infrastructure (bikes are banned from most of it), it blasts traffic into the city to Lothian Road.   Presumably because it was built on top of an old railway, there are very few ways across it.  I can understand why it presents a design challenge to urban planners. But the half-hearted and poorly designed attempts to deal with it can only be evidence that Edinburgh has no respect for its cyclists and little aspiration to be a liveable city.

There are three ways across (that I know of) but until yesterday I had only ever used one of them.   And that's because they are impossible to find and crap when you get there.

Can't go under it: I use the Telfer subway quite a lot to get from Fountainbridge to the Dalry Road and Haymarket.  It's a nice off-road route to our closest Lidl and I've been this way a few times recently with my kids, stocking up on lebkuchen and stollen. It ought to be a good route to and from the Russel Road access to the North Edinburgh Path Network, but it isn't.

If you're on foot you need to have good eyesight to watch out for dogdirt, and you know to watch out for the cyclists coming around downhills on blind corners -- three of them (if you include the path to Lidl). Oh, and the bollards on the Dalry end aren't wide enough for our trailer, and the crossing at the Fountainbridge is misaligned, and not a toucan.  And it's not at all well signposted from the Dalry side. So all in all, not a route that signals 'we've been thinking how we can make life easier for bike users". 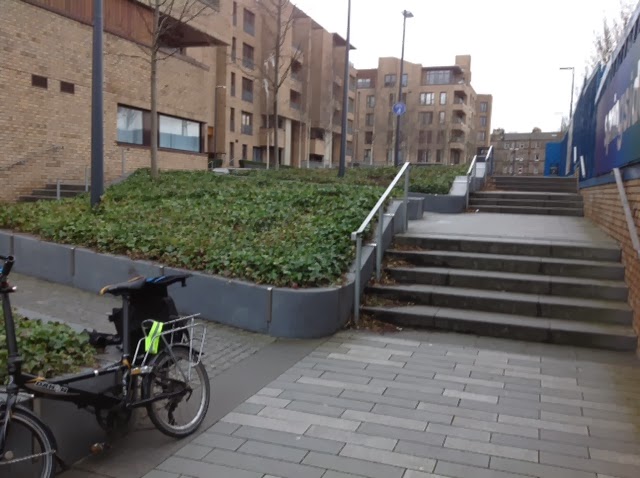 Can't go across it:  The Springside 'zig-zag' is the newest crossing point, and while I'd heard about it, and seen it from the bus,  I'd not appreciated its true horror. it was included on a 'quiet route' by cyclestreets, which makes sense - it's the sort of infrastructure that would be appreciated by those not wanting to venture onto the busy streets around there.  Once you find the Fountainbridge access point, the route takes you down a reasonably wide, well-signed shared use pavement between two new housing developments, to a downhill slope that takes you to a toucan crossing, and onto another shared use pavement.  So far, so good.  but, faced with a wide, gently sloping space and the need to get cyclists, buggies, and pedestrians up and down, they built what you see here - two sets of stairs, with a  windy cobbled ramp in the middle.  The incline on the ramps is nice and gentle, but it takes forever, and the corners are too tight to negotiate easily even on my 'nippy' folder.   Worst of all, it pushed each user into the footway repeatedly.

Can't go over it: the final route, I have yet to find, despite cycling this area regularly. I am told that it crosses over the Western Approach and takes cyclists  to Festival Square (which may soon be renamed Mandela Square). If I find it, I'll let you know.

All of these routes have one thing in common (other than that they've been poorly designed) they've all been built into developments.  It's pretty clear that they've been tacked on by developers, obliged to make their developments accessible to bus stops and  footpaths in order to secure planning permission, but with no real thought to its actual usability.

What's frustrating is the potential that's been missed, and the resources that have gone into these underutilised feats of engineering.   Why are they so hard to find and use? Why are they not 'intuitive' ? Why don't they make people want to use them?

Even more frustrating is that the most used one -- the Telfer subway -- is probably the worst designed - bringing cyclists and pedestrians into conflict needlessly day after day.

Is there any way past this wasteful squandering of space and potential to make cities that are permeable and accessible and liveable? Where are the people with expertise in these areas? and how do we get their knowledge and ideas spread more widely?
Posted by Sara Dorman at 2:15 pm

Yes, the 3rd crossing exists, but it's no better than the other two - worse, in fact, since it carries large numbers of pedestrians and was clearly designed inadequately for this.

Yet the council's original masterplan for the entire old goodsyard area here (20ish years ago?) showed this link as part of a cycleroute from the canal to the West End - a route which now does exist, but in the most convoluted, invisible and conflict-inducing fashion that you could possibly imagine. It was a result of a whole series of individual applications by different developers for their own sections of the entire site, and a failure by the Council Planning Dept, in granting planning permissions over the years, to ensure consistency and adequacy of the cycleroute which was on their own masterplan. A not unfamiliar scenario, but this is certainly Edinburgh's prime example of that.

and suffers badly from a windy ramp past smokers outside the Standard Life office. But it's a really useful route for getting to the West End of Princes Street and links directly to the canal offroad, especially compared to the alternative of battling Lothian Road.

In fairness the "3rd crossing" has no steps at the south end and has bicycle friendly ramps at the north end. As a pedestrian I use it every day and disagree that it "was clearly designed inadequately". I quite like that it is shared by pedestrians and cyclists.