I've written before about the last 10 yards of the school run being the part that puts me (and others) off letting my kids cycle to school.  Today it was just the last yard.

We were nice and early, so it should have been quiet. Then, right in front of the school gate, as my 6 y.o. was about to turn in, a mum pulls up, on the wrong side of the road, so that she can drop her darling straight in front of the gate.  Car coming behind her stops, thinking we'll want to go around her, but of course we don't.  Nice of him though.  It did mean that for a few minutes traffic was at a total standstill in all directions. 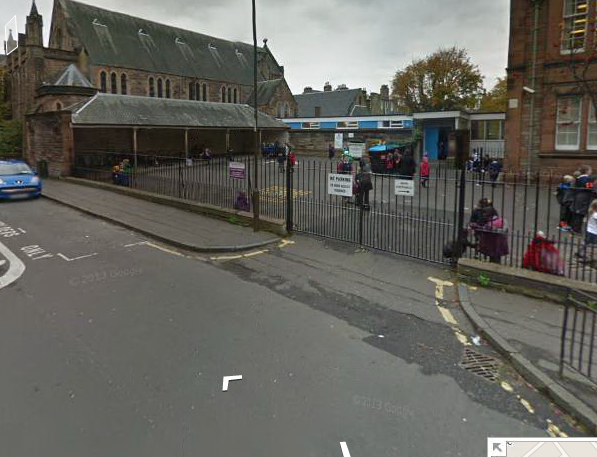 I give her the 'universal shrug of bafflement' at which point I can see her shouting at me from inside the car. Then she gets out and shouts at me a bit more. Apparently, 'the road is for everyone'. And *I* wasn't sharing.

Considering that she was on the wrong side of the road, I find that hard to comprehend.  But at the same time, I can see why she felt she could do this -- there are no road markings at all suggesting that this might be an inappropriate thing to do. The gates in the picture above were open, so the 'no parking' signs were not obvious (and anyway, she wasn't parking, she was 'dropping').

Last year, after I complained, the school put some colourful banners encouraging parents to 'park somewhere else' but they're further along the railings. We really need to rethink our road markings and the messages we send parents.

But at the same time, how did we end up in a society where a parent thinks that it is appropriate to put her car, engine running straight in the path of a six y.o. on a bike about to pull into her school gate?

Must be the phase of the moon!

Taking the boys to school today, just at the back gate pinch point, signed "give way to oncoming traffic", a driver chooses to assert might over right. She stops in front of us, as we stop in front of her, then attempts to inch forward to shove the boys out of the way.

A very forcible Gandalf impression was required to let the boys filter round her safely. She was not chuffed at her illegal progress being impeded...

The bottom-line is probably that the street in front of Bruntsfield School (Montpelier) is too narrow/congested for parents to do curb-side pick-ups and drop-offs safely. If they must bring their cars, they should probably use one of the connecting streets (e.g. Montpelier Park or Viewforth).

the other problem is that she obviously doesn't feel she can drop child on the correct side of the road and trust him to cross and enter gate. madness.

Well as you would probably agree, it is not especially safe to either walk or cycle around there during the drop-off and pick-up periods. The available space is simply not sufficient to accommodate intensive car use.

she obviously doesn't feel she can drop child on the correct side of the road and trust him to cross and enter gate.

Of course - there are some dreadful drivers out there. Crossing the road at dropping off time would be suicidal...

My kids went to Bruntsfield Primary, many moons ago. Looks like not much has changed! Since it is a public road with on street parking, it would be difficult to block it off with bollards. I think the school and the toon cooncil ought to sit down together to come up with what is clearly an unsustainable situation.