In praise of tandems...

Every busy mom needs a tandem. I'd say that it was the SUV of bikes but that wouldn't convey the freedom that a tandem gives. An SUV, or people carrier, as it is called in North America, implies that you spend all your time ferrying kids around.  But the tandem not only gets them used to contributing to that effort, but also encourages them to be more independent. 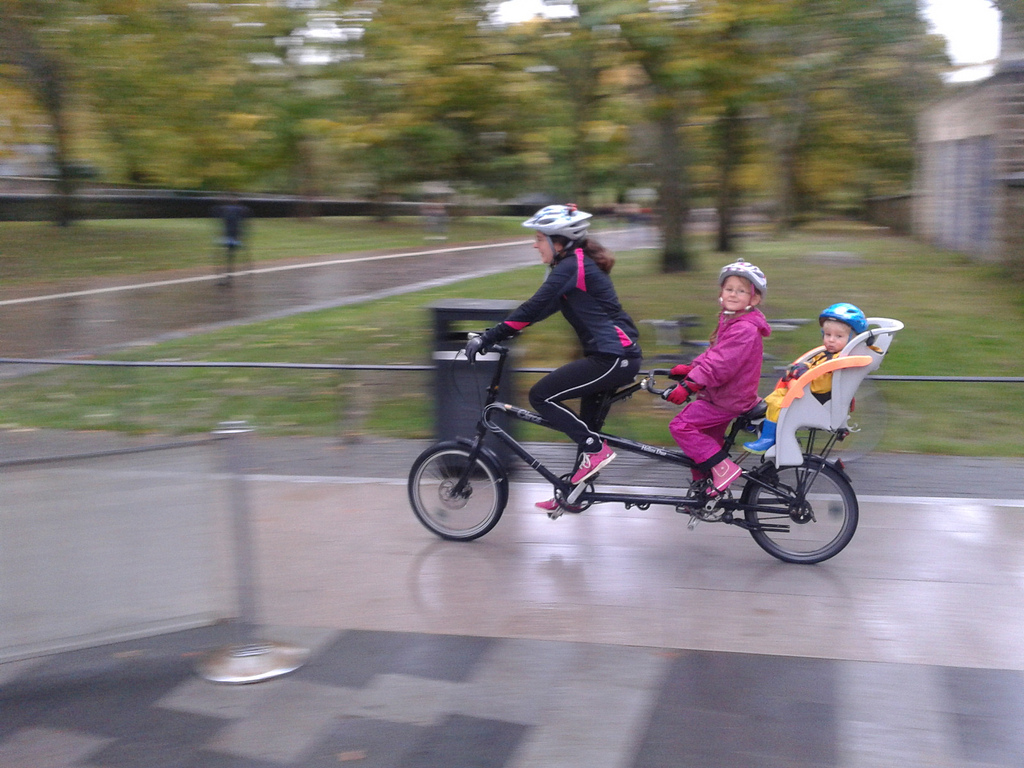 When we got our tandem, K. (now age 5) started off mostly wanting to ride with me on it.  And while I was thrilled that she wanted to, we were a little worried that she was 'deskilling' on her own bike. But, she has now started to want to ride her own bike more and more.  So, if we go off on a Sunday afternoon cycle, it can be a case of trying to convince her to ride the tandem with me!  And she chooses to ride to school on her own often as well.   I'm sure that it is her experience of being on the tandem that has given her the confidence to do this.

Our tandem  has the added benefit that both the adults in our family can ride it, despite a height differential of more than a foot between us, and we can take the baby along too.  And, as you can see in the header photo,  we sometimes add on a trailer - mainly for cargo, although in theory we could take kids in it. So, if I'm on my own I can take the kids with me on the Saturday morning  farmer's market   run (as we did last week before soccer/football) or do a 'big shop' by bike.

All of which means that I can do the school run in the morning, and still get to work at a decent hour.  And contribute to the weekend activities.  All without a car, or spending hours on a stuffy bus.  And get some exercise - which really helped me get back into shape after baby #2.  The only problem I've got now is that I invested in a nippy folder over the summer, so that I had an alternative bike for when K. wanted to ride her own bike, or when the rest of the family needed the tandem.  I love the feeling of freedom: a bike with no kids attached -- whee! And I love zooming up hills on it. But I'm definitely not burning as many calories....
Posted by Sara Dorman at 7:14 am