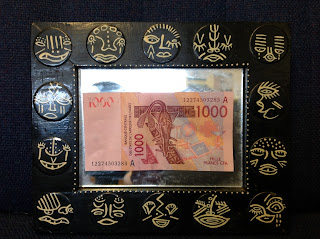 I was given the CFA note above by Nathaneal and his comrades, who I met on my flight to Nairobi. They  had left Cote d'Ivoire the day before, to study for degrees at Africa University in Mutare.  All four young men described themselves as pastor's sons, and said that their church was sponsoring their studies.

But they were being deported from Zimbabwe, because they had not understood the letter sent from the University which advised them to get visas before travelling to the University (but did not specify that it should be obtained before they entered the country).

As you can imagine, they were devastated. In Nairobi airport they were able to phone their sponsors and the University, and had some hopes that they could return to Zimbabwe, but the last I heard from them, they were back in Abidjan.  Without some sort of support to buy new tickets, they were not going to be able to return to Zimbabwe and begin their studies.

I hope that all the students starting their studies again this week appreciate how fortunate they are.  I can't count the many sources of funding that made it possible for me to get my education, but they include my parents, the Canadian government, the Newfoundland government, Cecil Rhodes (!), many small scholarship funds, and the neighbours who paid me to shovel snow, mow their lawns and babysit their kids. I appreciate them all (although that's not really the right word for how I feel about the source of the Rhodes funding...).