What a great ride on Sunday!

What a great ride on Sunday.  No, not Wiggo and Cav but us - and half the rest of the population of Edinburgh who braved the wind and threatening clouds.   (actually, we had a lot of sun. To quote a small person 'it's like another world mummy!')

We finally made it out the Innocent past Duddingston, which we'd wanted to do for ages, and it was the perfect ride because it was so sheltered.  Thanks to our Spokes maps we were rightly guided all the way - with only a few minutes confusion nr Brunstane Station before a kind passing cyclist came over to advise us (thanks!).  After exploring the waterfront at Musselburgh and then meandering up the Esk, we followed NCN1 signs all the way back to Newcraighall, completing our loop and getting back on the Innocent for the ride home (stopping off at the cool climbing thing which according to the map may be called Jewel Park).  We'd never ridden much of the NCN before, and it was a good experience.  Between that and the Spokes maps, we really felt in good hands. I'd based the loop back from the Esk based on the Spokes map and didn't realise it would be as well signposted as it was.  Really nice not to have to stop at every corner and consult the map.


We did discover one big gap in the Spokes maps -- they don't show playparks! Would be good to get these included in the next editions. Helpful to know when they're coming up - either so that a stop can be planned, or avoided.

En route we saw a 'weehoo' trailer which was the rider clearly really liked, although I'm glad I didn't go down this route.  We also 'spotted' another Helios tandem on Clerk St, in convoy with what looked like a family bike and trailer. And just lots of cyclists. Friendly cyclists (except the roadies who clearly thought I was obstructing their access to the narrow bridge over the Esk). And friendly walkers too.

Best thing of all, not only did we all gets lots of exercise, and explore a huge area, but we got home in lots of time for lunch and that other cycle ride in France. Yay! 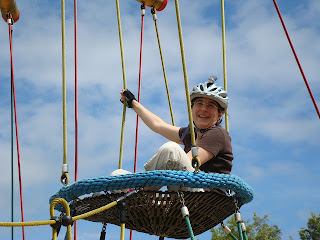 (Only slight downside - we all thought of lots of bits of 'technical' clothing and kit that we really need if we're going to do this again!)
Posted by Sara Dorman at 7:44 am